Brittany Chrishawn Williams, who was brutalized after police trespassed on her property in Jacksonville, Florida, releases bodycam footage that exposes the lies of the officers. 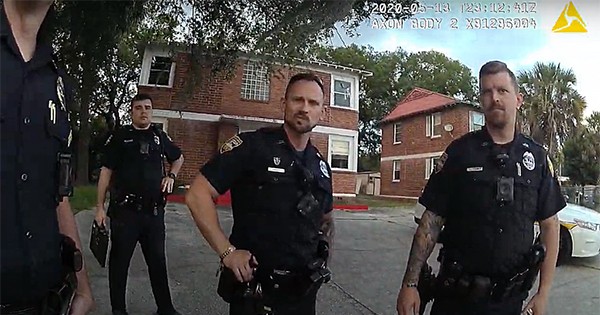 Jacksonville, FL — Brittany Chrishawn (Williams), the award-winning police brutality filmmaker who was brutalized by police and left with broken teeth and permanent nerve damage, has finally received bodycam footage after a 7-month long wait (Watch the footage here). This footage exposes the lies of the officers, and parts of the body cam footage released by prosecutor Richard James Giglio have been edited to protect the police. There are random sections in some of the videos where the audio has been removed, and these sections happen to be at the exact moments that Brittany Chrishawn Williams had already described in her affidavit of facts. She wrote in her affidavit back in May 2020 that she heard JSO police officers plotting to conspire against her and joking about being able to get away with illegal acts. This is a major issue that must be brought to light because police officers should not be able to edit body camera footage to protect themselves and convict innocent people.

It is unlawful and inhumane for Brittany to be facing up to ten years in prison for fictitious felony charges that have been wrongfully conspired against her. And it is unethical and unjust for the justice system of the United States to allow tampering of police bodycam footage. Brittany’s case sheds light on the countless number of other police brutality victims who are suffering because of corrupt evidence.

But regardless of the edited body camera footage, the police misconduct that did make the final cut is crystal clear. The footage shows Officer A. Carmona #64386, who trespassed on Brittany’s property and initiated the incident, lying about stand-still traffic being the reason for him trespassing. All of the footage available clearly shows that there was absolutely no traffic at all. And Carmona admits to leaving the public lot of the corner store to back into Brittany’s driveway. There’s a clip from the officer’s body camera where his supervisor (D.P. Jadlocki #63949) keeps asking why he parked in Brittany’s private driveway because there is a variety of other open lots on that street. There’s even the large vacant public lot that the police officers usually park in which is only feet away from Brittany’s driveway. All of these public lots are located within the same block. There’s also a gas station right across the street from Brittany’s house where Carmona could have parked as well. The supervisor goes on to accuse A. Carmona of having a sexual relationship with his victim because that is the only logical conclusion the 15-year veteran could determine based on the invalidity of his subordinate’s story.